ANN ARBOR, Mich. —  If you don’t have health insurance, or your insurance coverage still leaves you with big bills, hospitals are supposed to let you know if you qualify for free or reduced-price care, and to charge you fairly even if you don’t.

That is, if they want to keep their tax-free nonprofit status under the Affordable Care Act’s new Section 501(r) rules.

But a new study from the University of Michigan Institute for Healthcare Policy and Innovation finds many nonprofit hospitals have room to improve.

Writing in the October 29 issue of the New England Journal of Medicine, the researchers report results from their review of Internal Revenue Service forms submitted by more than 1,800 nonprofit hospitals nationally. They looked at records for 2012, the first year hospitals had to comply with the ACA’s requirements and the most recent year for which data were available.

A mixed bag of findings

• Nearly all (94 percent) of the hospitals reported having a written charity care and emergency care policies, to guide them on deciding which patients could get free or reduced-price care. Though the ACA doesn’t tell hospitals which patients to offer discounts to, or how generous to be, it does say they must have such policies and make them known.

• Only 29 percent of the hospitals reported they had begun charging uninsured and under-insured patients the same rate that they charged private insurers or Medicare. Such rates are often far lower than the “chargemaster” rates hospitals set as the starting point for negotiating with insurers about how much they will actually accept.

• Only 42 percent of the hospitals reported they were notifying patients about their potential eligibility for charity care before attempting to collect unpaid medical bills. The ACA requires such notifications to give patients a chance to apply to get some or all of their costs written off.

• One in five hospitals had not yet stopped using extraordinary debt-collection steps when patients failed to pay their medical bills. Such steps, such as reporting patients to credit agencies in ways that can damage their credit scores, placing liens on their property or garnishing their wages, are now banned.

• Only 11 percent of hospitals reported having conducted a community health needs assessment in the past three years as of 2012. Such assessments, to identify pressing health issues in the population they serve, don’t necessarily affect charity care. 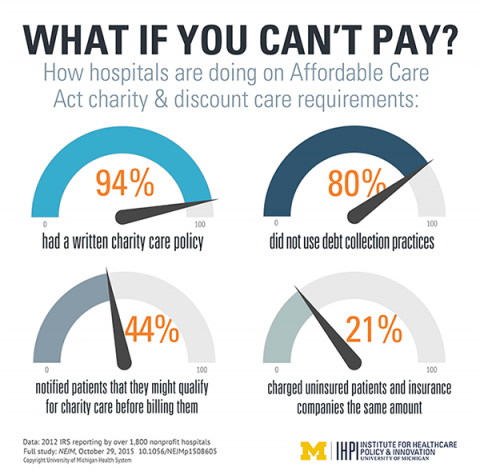 Playing by the rules?

Nonprofit hospitals are exempt from paying most taxes, which was valued at $24.6 billion in 2011. In return, they must justify their nonprofit status to the IRS each year by showing how much care they write off for those who cannot pay.

When Congress wrote the ACA, they sought to use the tax tools available to them to reduce hospitals’ use of aggressive methods to pursue payment, and perhaps to prevent individual bankruptcies or credit score damage caused by medical bills.

Though hospitals had to report for tax year 2012, the federal government did not issue final language about exactly how to comply and penalties for non-compliance until 2014. Nikpay and Ayanian will continue to study the issue as new IRS data become available. They are already working on 2013 data. 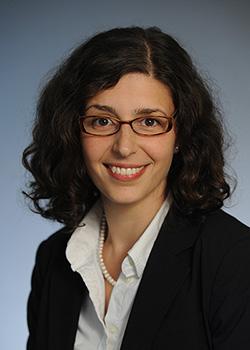 Ayanian, a professor at the U-M Medical School with joint appointments in public policy and public health, says physicians and patients should familiarize themselves with policies at their hospitals. 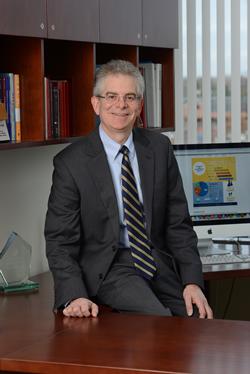 “Financial protection for patients is an under-recognized component of the ACA, and it’s important that hospitals are required to have policies, that they disclose these policies, and that they enable people to apply for help in a timely way,” he says. “This will be most important for patients living in states that have not expanded Medicaid to cover people with lower incomes. Hospitals in those states will likely experience additional demand for charity care because they now need to publicize their charity care policies and comply with other IRS provisions.”

With these added requirements, hospitals may start to pull back on how generous they make their charity care policies – and Section 501(r) of the ACA does not set standards for that, Nikpay notes.

As more Americans enroll in insurance plans that have high deductibles, they may find they need to ask for financial relief after a hospital stay. Even a single person earning $40,000 a year, or a family of four with an income of around $80,000, might qualify for discounts from many hospitals.