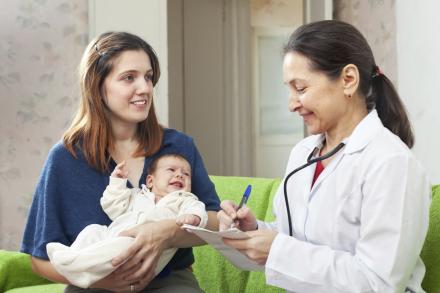 More women may have the option to get an intrauterine device or contraceptive implant immediately after delivering a baby, thanks to expanding Medicaid coverage around the country, a new University of Michigan Health System study finds.

Specific Medicaid reimbursement for an IUD or implant at the same time as delivery has gone from being available in no states to 19 in just three years, according to the U-M analysis that appears in the journal Contraception. Eight other states are considering the enhanced reimbursement.

Between 40-60 percent of low-income women who say they want an IUD or implant don’t make it to a follow-up office appointment to get their preferred method of birth control after having a baby, often due to childcare, transportation and other barriers.

“Postpartum women have a high risk of unintended pregnancy, partly because less than 10 percent use the most effective forms of contraception,” says lead author Michelle Moniz, M.D. M.Sc., an assistant professor of obstetrics and gynecology and researcher at the University of Michigan Medical School.

“Many women’s first choice for birth control is an IUD or implant, which we know are the safest and most effective forms of reversible contraception. The problem is that many postpartum women can’t make it back to the office for an appointment to get one. Our findings suggest that more and more agencies recognize significant benefits to providing this service before women even leave the hospital.” 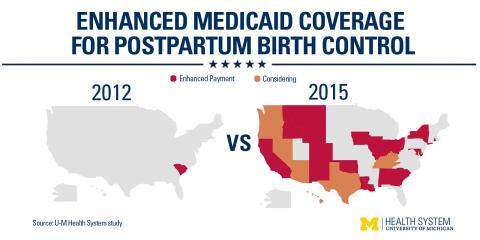 Unintended, repeat pregnancy too close to the birth of a first baby can be dangerous for both moms and babies, with higher likelihood of adverse outcomes such as miscarriage, preterm labor, and stillbirth.

IUDs inserted immediately after birth have a slightly higher chance of falling out than IUDs inserted 8-10 weeks later– but the risk of dangerous complications like infection or injury is exceedingly low with both immediate and delayed placement. Immediate placement of IUDs, however, is cost-effective, authors note. Contraceptive implants do not have risk of falling out, so they are a particularly attractive option for insertion during the delivery hospitalization.

“Reimbursement policies have been one barrier to providing a large group of high risk women with the safest and most effective forms of reversible birth control in a way that’s most convenient for them,” Moniz says.

“We found that the landscape is changing rapidly, with more Medicaid agencies making it easier for women to get the kind of birth control they want, when they need it most. The majority of states, however, still do not provide this specific coverage, suggesting a great need to correct misinformation about immediate postpartum contraception and concerns about cost to help promote better access for more women.”