One size does not fit all when it comes to marrow fat, scientists say

ANN ARBOR, Mich. — While most of us worry about the fat cells building up on the fleshy parts of our bodies, scientists have started to pay serious attention to another kind of fat cell deep inside our bones, in what’s called the marrow. 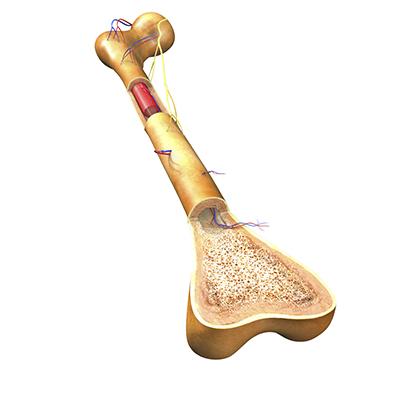 Today, they’ve published new important clues about this little-understood kind of fatty tissue – including the discovery that there are two different types.

Their results pave the way for more research on how marrow fat influences the rest of the body, and its role in a range of diseases including osteoporosis.

In a paper published in Nature Communications, the team from the University of Michigan Medical School and other institutions describes research in rodents, and a small group of women, that led them to conclude that there are two kinds of fat cells in what scientists call marrow adipose tissue, or MAT. 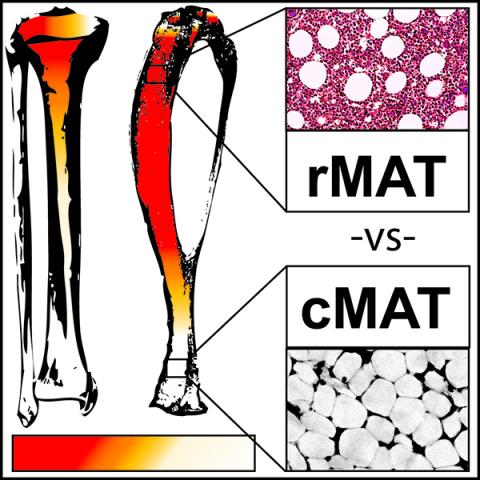 The researchers found that both human (left) and rodent (right) leg bones called tibia appear to have two kinds of marrow fat - and that one tends to concentrate near the top of the bone while the other is lower down.

The findings deepen understanding of MAT, which makes up about 70 percent of the marrow in the adult human skeleton. They also make it clear that researchers need to take different MAT types into account when studying its role in disease.

Scientists have come to realize MAT plays a key role in our body’s metabolism. MAT levels rise in many different diseases, from anorexia to type 1 diabetes, and also go up as we age and as bones get brittle and break down in osteoporosis. 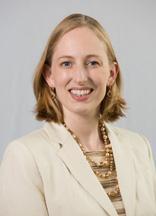 “Reducing marrow fat has been mentioned as a target for osteoporosis therapy, but before such approaches go further we need to get a more targeted understanding of MAT and the effects of potential intervention,” says Erica Scheller, Ph.D., DDS, who is transitioning from a postdoctoral fellowship at the U-M Medical School to a faculty position at Washington University in St. Louis.

Scheller worked with senior author and U-M physiology professor Ormond MacDougald, Ph.D., and others to determine that MAT actually exists in two forms: regulated and constitutive.

Their detailed analysis shows that the two kinds of cells store different types of fat molecules, that their genetic profile differs in very specific ways, and that they develop at different times in the life cycle and interact in different ways with the blood cell formation process that also happens in the marrow.

Though the researchers can’t yet see whether what they saw in mice holds completely true for humans, their study includes data from five women that agreed to let the researchers study the fat composition of their leg bone marrow using special scanners.

Just as in the mice, the further down the leg bone, the more unsaturated fat there was inside the marrow. This is the first evidence in humans that two types of MAT exist, and the team will continue to study the bones of humans. 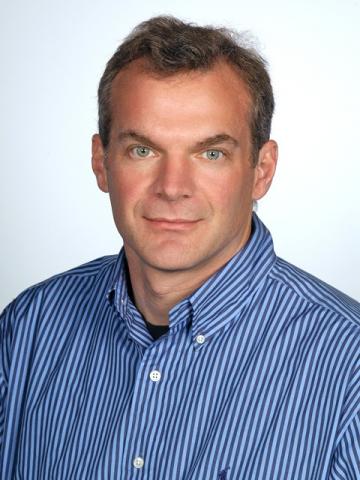 “We’re definitely finding that MAT is more complex than anyone originally thought, and that we have a long way to go in understanding it,” says MacDougald, who is the John A. Faulkner Collegiate Professor of Physiology in the Department of Molecular and Integrative Physiology, and a professor of Internal Medicine in the Metabolism, Endocrinology & Diabetes division. “We have a lot of it, and we need to do more to understand why it’s there and what it’s doing, and how it changes in different diseases.”

From here to tomorrow

MacDougald, Scheller and their colleagues will continue to study the two forms of MAT in further studies in mice, and in bones removed from patients having hip replacement surgery and limb amputations.

Getting healthy bone samples is harder, but over time they hope to flesh out the full picture of how the two forms of MAT form and act.

The techniques they developed in their lab, which enable scientists to detect the characteristics of MAT, should be useful to scientists around the world studying bone marrow.

And, the findings they’ve made should make MAT composition a key marker for scientists that study blood cell formation, bone biology and metabolism.

In addition to Scheller and MacDougald, the study’s authors include scientists from the Maine Medical Center Research Institute, the Boston University School of Medicine, Harvard Medical School and the U-M Department of Orthopaedic Surgery.