A quarter of parents believe vaccines are safer now than they thought a year ago; a third more supportive of school and daycare immunization requirements

ANN ARBOR, Mich. —   Over the same time period that multiple outbreaks of measles and whooping cough made headlines around the country, parents’ views on vaccines became more favorable, according to a new nationally-representative poll.

The University of Michigan C.S. Mott Children's Hospital National Poll on Children's Health asked parents in May how their views on vaccinations changed between 2014 and 2015 – during which two dozen measles outbreaks were reported in the U.S., including a multi-state outbreak traced to Disneyland.

One-third of parents who participated in the poll indicated they now perceived more benefits of vaccines, while one-quarter perceived vaccines to be safer now than a year ago. One-third of parents also reported being more supportive of school and daycare entry requirements for vaccination than they were the previous year.

“Over the last year there have been high-profile news stories about outbreaks of vaccine-preventable diseases like measles and whooping cough. These news reports may be influencing how parents perceive childhood vaccines across the country,” says Matthew M. Davis, M.D., M.A.P.P., director of the National Poll on Children’s Health and professor of pediatrics and internal medicine in the Child Health Evaluation and Research Unit at the U-M Medical School.

“For a quarter to a third of parents to say that their views on the safety and benefits of vaccines have shifted in just a year’s time is quite remarkable. Parents’ perceptions that vaccines are safer and offer more benefits are also consistent with their stronger support of daycare and school entry requirements for immunizations.” 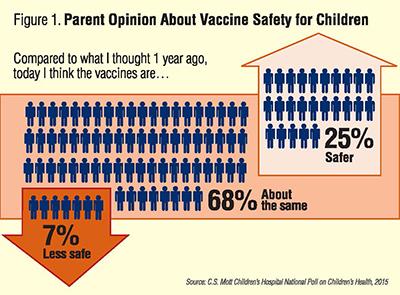 A resurgence of whooping cough and measles over the last few years has triggered a national debate over vaccinations and garnered ongoing media coverage. California Gov. Jerry Brown on Tuesday signed a bill to impose one of the nation’s strictest vaccination laws following the outbreak linked to Disneyland in December 2014 that sickened more than 100 people. A surge in vaccine-preventable disease outbreaks have also spanned across the country from New York to Michigan to Washington State.

The majority of parents polled believe vaccines have the same benefits as a year ago and think the safety of vaccines has stayed the same. A minority of parents also had less favorable views on vaccines, with 7 percent perceiving less safety, 5 percent perceiving fewer benefits and 6 percent saying they were less supportive of school and daycare entry requirements than the previous year.

“Outbreaks of disease can safely be prevented through childhood vaccination, but there are deeply-held convictions about parents’ autonomy and remaining concerns among some parents about vaccine safety,” says Davis, who is also with the U-M School of Public Health, Gerald R. Ford School of Public Policy, and deputy director for U-M’s Institute for Healthcare Policy and Innovation.

“Media coverage of outbreaks over the past year, accompanied by messages about vaccines for whooping cough and measles, may be swaying parents’ opinions toward stronger beliefs in the positive aspects of vaccines. The impact of such shifts in perception will ultimately be measured by whether more parents vaccinate their kids.”

Data Source: This report presents findings from a nationally representative household survey conducted exclusively by GfK Custom Research, LLC (GfK), for C.S. Mott Children’s Hospital via a method used in many published studies.  The survey was administered in May 2015 to a randomly selected, stratified group of parents age 18 and older with at least one child age 0-17 (n=1,416)  from GfK’s web-enabled KnowledgePanel® that closely resembles the U.S. population. The sample was subsequently weighted to reflect population figures from the Census Bureau. The survey completion rate was 55% among parent panel members contacted to participate. The margin of error is ± 2 to 3 percentage points.