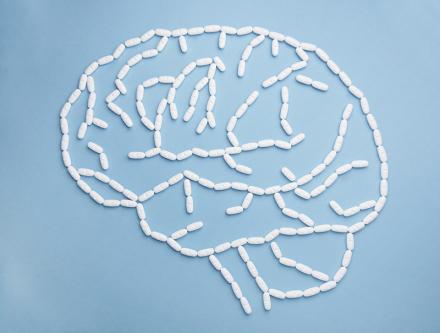 But they’re much less likely to be getting their mental health care from a psychiatrist, the results also show.

That raises questions about whether they could be at risk of problems caused by a collision of multiple medications – and about whether primary care doctors may need more support to care for older people with depression, anxiety and other conditions.

The new findings, published in the Journal of the American Geriatrics Society by a team from the University of Michigan Medical School and VA Ann Arbor Healthcare System, come from the first study to compare overall outpatient mental health treatment in adults over age 65 with that of patients between ages of 18 and 64.

The authors probed nationally representative outpatient visit data, combined with U.S. Census data, to come up with rates of different types of care. 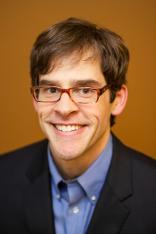 “Our findings suggest that psychotropic medication use is widespread among older adults in outpatient care, at a far higher rate than among younger patients,” he says. “In many cases, especially for milder depression and anxiety, the safer treatment for older adults who are already taking multiple medications for other conditions might be more therapy-oriented, but very few older adults receive this sort of care.”

The issue of medication use is particularly concerning for older adults, because the risk/benefit balance can shift as they become more likely to experience side effects or other adverse events.

For instance, anti-anxiety benzodiazepine drugs such as Valium, Xanax, Klonopin and Ativan (and their generic counterparts) may be relatively safe for younger adults, but carry a higher risk of car accidents, falls, fractures and worsening of thinking ability or memory for older patients.

Antidepressants can interact with blood thinners and painkillers and can raise blood pressure, all of which are more likely to be problems for older adults, who are generally on more medications than their younger counterparts. 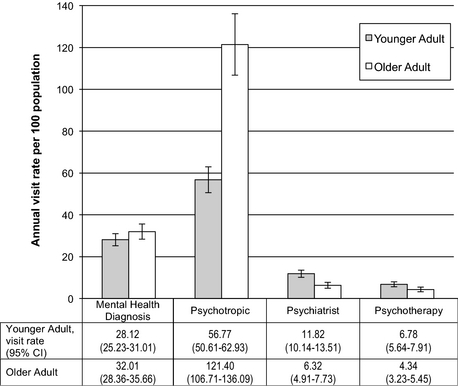 A side-by-side comparison of outpatient mental health-related visit rates by adults under 65 (gray) and over 65 (white).

“We need to pay special attention to polypharmacy, or multiple drugs taken at once, when prescribing psychotropic drugs in this population, because so many older adults are already on multiple medications,” says Maust, an assistant professor in the U-M Department of Psychiatry.

He and his colleagues started with information from over 100,000 outpatient visits to outpatient physicians between 2007 and 2010 collected by the National Ambulatory Medical Care Survey, a national survey administered by the National Center for Health Statistics of the Centers for Disease Control and Prevention.

They examined four types of visits: ones where patients received a mental health diagnosis; saw a psychiatrist; received psychotherapy; and/or received a prescription or renewal of a psychotropic medication (including antidepressants, anxiety-calming drugs called anxiolytics, mood stabilizers, antipsychotics, or stimulant drugs).

They converted their results to a population-based visit rate, which helps consider the number of visits out of the eligible pool of potential outpatients in the community.

“While it’s still true that we have patients who are not getting treated for mental health concerns, these data suggest that we also need to be mindful of the possibility of overtreatment, especially given the changing balance of risk and benefit as patients age,” says Maust. “Collaborative care efforts in primary care that seek to create structure and support for these patients, along with appropriate reimbursement for this type of service, could be key.”

Maust, and colleagues Frederic Blow, Ph.D. and Helen Kales, M.D., are all faculty at U-M, members of the VA center, and members of the U-M Institute for Healthcare Policy and Innovation. The research was supported by a Beeson Career Development Award Program (AG048321) and by AFAR, The John A. Hartford Foundation, and The Atlantic Philanthropies.