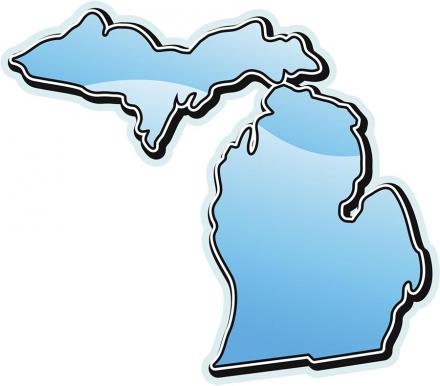 But a new University of Michigan study suggests that the two have gone hand-in-hand in the state of Michigan, despite a rapid influx of hundreds of thousands of newly insured people under the state’s expansion of Medicaid.

In fact, the research shows that the availability of primary care appointments actually improved for people with Medicaid in the first months after the state launched the Healthy Michigan Plan under the Affordable Care Act.

In just those few months, more than 350,000 people -- one-third of the previously uninsured working-age adults in the state -- joined the plan.

In a paper published in the journal Health Affairs, the team from the U-M Institute for Healthcare Policy and Innovation reports the results of a “secret shopper” study that measured the availability of primary care appointments.

Overall, wait times for the first available appointment for all patients stayed the same as before the Medicaid expansion took effect, at about a week. 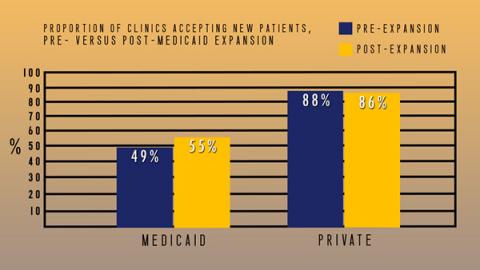 Primary care appointment availbility for Medicaid enrollees went up after the program expanded in Michigan, while availability for those with private insurance dropped only slightly.

The “secret shopper” study measured how easy it was for Healthy Michigan Plan participants to fulfill a key provision of their new coverage: the requirement that they see a primary care provider within three months of getting covered. This stipulation, and other requirements for plan members, was included in the plan under a waiver with the Centers for Medicare and Medicaid Services.

Combined with the larger-than-predicted numbers of people who enrolled in the plan, this requirement had caused some worry that appointments would be hard to get.

That’s what motivated the U-M team to study the issue, with funding from the Blue Cross Blue Shield of Michigan Foundation and the Robert Wood Johnson Foundation.

“We expected that if practices were getting full due to Medicaid expansion and an increase in private insurance under the ACA, we would see decreased availability of appointments and longer wait times. In fact, we saw the opposite happen,” says lead author Renuka Tipirneni, M.D., M.S., a clinical lecturer in the Division of General Medicine at the U-M Medical School and a recent Robert Wood Johnson Foundation Clinical Scholar at U-M.

Watch a video about these findings

There were some exceptions. At some clinics, new patients had to wait months for an appointment. “The clinics that had long wait times for new patient appointments had long waits for everyone,” says Tipirneni, who notes that the study gave the authors a new appreciation for the challenging job of the clinic staff who schedule appointments for patients.

“Getting appointments as new patients is a challenging process. This study illustrates that although fewer practices accept Medicaid than accept private insurance, expanding access to coverage in Michigan has not made it more difficult to get an appointment as a new patient. That is good news for patients in Michigan” says Matthew M. Davis, M.D., MAPP, senior author of the study and professor of pediatrics, internal medicine, public policy and public health at U-M.

More about the study

Before the expansion took effect, the researchers had called the nearly 300 clinics and identified themselves as researchers. About half the clinics had only one or two primary care providers; six percent had 10 or more providers. Nine percent of the clinics were safety-net clinics, in line with the state’s overall distribution of clinics that accept all patients regardless of insurance status.

While there was a small drop in the percentage of clinics that were taking new privately insured patients after expansion, this did not result in an overall increase in wait times. The study was not designed to detect increases in availability of private appointments, nor did it distinguish between privately insured patients with ACA plans bought on the health insurance exchange at HealthCare.gov, and those with employer-sponsored coverage.

“This study answers the question of what is happening, but not why it is happening,” says Tipirneni. “We’re hoping to find out why this occurred through further research.”

The U-M Institute for Healthcare Policy and Innovation, of which Davis is deputy director, has a separate state contract to evaluate the overall impact of the Healthy Michigan Plan. Under way since late 2014, the initiative is probing issues of access, provider practice and enrollee experience directly. For more about this effort, visit http://umhealth.me/ihpihmp .

In addition to Tipirneni and Davis, the study’s authors are Karin V. Rhodes of the University of Pennsylvania, Rodney Hayward of the U-M Medical School and VA Center for Clinical Management Research, Richard L. Lichtenstein of the U-M School of Public Health, and Elyse N. Reamer of the RWJF Clinical Scholars Program at U-M. All except Rhodes and Reamer are members of IHPI.