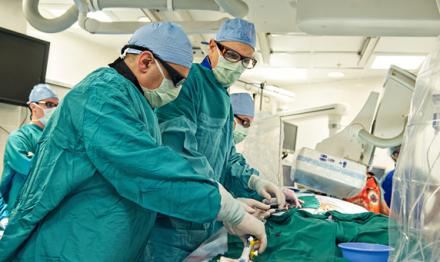 The U-M participated in studies showing the survival benefit of TAVR and is testing the next generation of heart devices designed to allow doctors to replace an aortic valve without opening a patient’s chest.

As one of the highest volume TAVR programs in the country, the University of Michigan is changing the health outlook of patients such as Lois Metzger, 81, who benefited from TAVR performed four years ago.

“I was at a crossroads,” says Metzger, who had the procedure in April 2011 after managing symptoms from fatigue to poor circulation. “Although I remember feeling scared, the procedure was a turning point to living a life I enjoy.”

She regularly travels between Naples, Fla., and Michigan where she was honored at a big family gathering in Frankenmuth, Mich., for her 80th birthday.

As many as 300,000 people in the United States are diagnosed each year with narrowed, failing heart valves, called aortic stenosis.

Without aortic valve replacement, 50 percent of patients will not survive more than an average of two years after symptoms begin.

The emergence of TAVR procedures is providing new hope for patients who -- because of age or other health conditions -- cannot undergo surgery. For the procedure, doctors rely on hollow tubes called catheters to gain access to the chambers of the heart rather than heart surgery.

The U-M’s Deeb and Chetcuti were among the authors of a New England Journal of Medicine study that revealed the effectiveness of TAVR as an alternative to open heart surgery ,

The U-M’s Deeb and Chetcuti were among the authors of a 2014 New England Journal of Medicine study that revealed the effectiveness of TAVR as an alternative to open heart surgery and a recent study that showed better outcomes lasting at least two years for these high-risk patients.

Clinical trials underway at the U-M are examining investigational devices with safety features that reduce valve leakage and are designed to allow doctors to reposition the artificial valve if needed.

The University of Michigan is a leader in the quest for new options for structural heart repairs. It is a destination for treatment of valve disease and specialists bring experience and a culture of collaboration to the U-M’s pursuit of cardiovascular innovations.