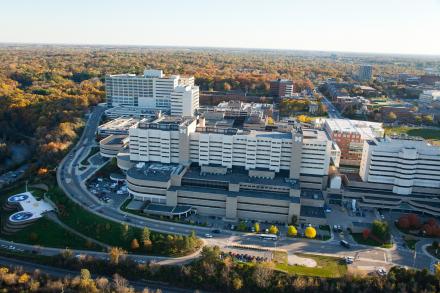 T. Anthony Denton, acting chief executive officer and chief operating officer of UMHHC, presented the positive projection of year-end results for fiscal 2015 along with the fiscal 2016 plan today to the U-M Board of Regents. He credited the positive financial performance of fiscal 2015 to strong patient volumes and high levels of engagement of physician faculty, nurses and support staff across all of UMHS’ clinical programs and care locations.

“We are very pleased with our fiscal 2015 results. Our talented and dedicated people are the difference,” Denton says.

The 100,000-square-foot primary and specialty care center in Northville, which opened in summer 2014, has improved access to U-M care for patients in metro Detroit.  It is running at more than 70 percent capacity. Occupancy at all UMHS hospitals was very high at 87 percent during fiscal year 2015.

Denton notes that in addition to keeping up with rising patient care demand, UMHS teams of physicians, nurses and administrators worked hard to continue the implementation of a new electronic health record and billing system known as MiChart.

Also today, the Regents approved a budget that sets a higher financial performance target for the fiscal year that begins July 1.That target is a 4.0 percent operating margin on revenues of $2.9 billion, based on further increases in patient activity and effective management to reduce the rate of expense growth.

Castillo notes that the Affordable Care Act did have an impact on clinical operations and financial health during the past year. The percentage of care paid for by Medicaid increased more than one percentage point, to 16.24 percent. That has contributed to a decrease in uncompensated or “charity” care. In fiscal year 2014, the health system provided more than $152 million in uncompensated care. In fiscal year 2015, that is projected to decrease to $110 million.

“We can be very proud of achieving our financial target. We plan to continue to focus on adding value while improving operational efficiencies in the coming year,” Castillo says.