Use of Mi-Prostate Score would reduce unneeded biopsies 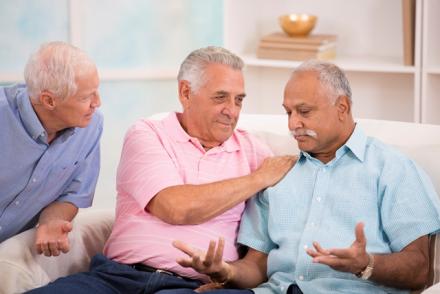 The test, developed at the University of Michigan Comprehensive Cancer Center, is called Mi-Prostate Score, or MiPS. It combines PSA with two markers for prostate cancer, T2:ERG and PCA3, both of which can be detected through a urine sample. The test has been available clinically since September 2013.

“Around 50 percent of men who undergo a prostate biopsy will not have cancer. We need better ways to manage elevated PSA and determine who really needs to have a biopsy. MiPS gives men and their doctors better information to help make those decisions,” says lead study author Scott A. Tomlins, M.D., Ph.D., assistant professor of pathology and urology at the University of Michigan Medical School.

The study looked at a total of 1,977 men who were undergoing prostate biopsy because of elevated PSA levels. Using urine samples, the researchers conducted MiPS testing and compared results to various combinations of PSA, PCA3, T2:ERG and other PSA-based risk calculators. They assessed how well the individual biomarkers and combinations of biomarkers predicted the likelihood of cancer and the likelihood of high-risk cancer – the aggressive type that needs immediate treatment.

The test reports individual risk estimates for prostate cancer and high grade cancer. Each patient’s personal threshold for choosing to undergo biopsy may vary, so there is no single cutoff for a “positive” result.

However, using one MiPS cutoff score to decide whether to biopsy patients would reduce the number of biopsies by one-third, while delaying the diagnosis of only about 1 percent of high-risk prostate cancers. The study is published in European Urology.

“MiPS gives men a more individualized risk assessment for prostate cancer, so that men concerned about their serum PSA levels can have a more informed conversation with their doctor about next steps in their care,” Tomlins says. A cost/benefit analysis of MiPS is being conducted.

PCA3 is approved by the U.S. Food and Drug Administration for prostate cancer risk assessment in men with a previous negative biopsy. Most of the men involved in this study were undergoing initial biopsy, suggesting MiPS can be useful earlier in the process.

The test is part of broader efforts at the University of Michigan to improve prostate cancer diagnosis, particularly detecting the type of cancer that requires immediate and aggressive treatment.

Mi-Prostate Score is available to anyone but requires a request from a doctor. For further information, call the University of Michigan's MLabs at 800-862-7284. Patients with questions about prostate cancer detection or treatment may call the U-M Cancer AnswerLine at 800-865-1125.

Disclosure: The University of Michigan has been issued a patent on the detection of ETS gene fusions in prostate cancer on which Chinnaiyan and Tomlins are listed as co-inventors. The University of Michigan licensed the diagnostic field of use to Hologic/Gen-Probe Inc., which sublicensed some rights to Ventana Medical Systems. Chinnaiyan has served as consultant to Gen-Probe and Ventana. Tomlins has received Honoria from and served as a consultant to Ventana.