ANN ARBOR, Mich. — A class of FDA-approved cancer drugs may be able to prevent problems with brain cell development associated with disorders including Down syndrome and Fragile X syndrome, researchers at the University of Michigan Life Sciences Institute have found. 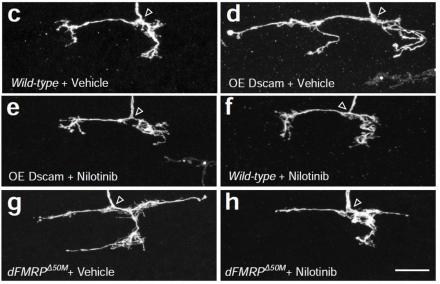 This series of images shows models of brain disorders in fruit fly neurons and their response to the cancer drug nilotinib.

The researchers’ proof-of-concept study using fruit fly models of brain dysfunction was published today in the journal eLife. They show that giving the leukemia drugs nilotinib or bafetinib to fly larvae with the equivalent of Fragile X prevented the wild overgrowth of neuron endings associated with the disorder. Meanwhile, the drugs—both tyrosine-kinase inhibitors—did not adversely affect the development or neuronal growth in healthy flies.

“This study proposes a potential therapeutic approach for treating brain disorders associated with dysregulated expression of the Dscam protein, which is seen in both Down syndrome and Fragile X syndrome,” said senior study author Bing Ye, whose lab is in the LSI. Graduate student Gabriella Sterne and postdoctoral fellow Jung Hwan Kim are co-first authors of the paper.

Down syndrome and Fragile X are the two most prevalent genetic causes of intellectual disabilities. Down syndrome is caused by an extra copy of chromosome 21, while Fragile X is caused by a mutation in a single gene. Recent studies by the Ye lab and by researchers at other institutions have pointed to a possible link between the two conditions.

During early development, neurons produce high levels of the proteins encoded by a gene called DSCAM as they undergo an intense period of extending and branching to connect with other neurons. (DSCAM stands for Down Syndrome Cell-Adhesion Molecule.) But problems can occur when Dscam levels don’t go back down.

In flies, when Dscam levels stay high, branches off of the ends of their neurons grow too long and make faulty connections with neighboring neurons. In humans, whose nervous systems and brains are far more complicated, the downstream impacts of Dscam dysregulation have not been fully identified.

In a series of experiments outlined in the study, the researchers showed that the Dscam protein activates another protein known as Abelson tyrosine kinase (Abl). The scientists then took genetically modified flies that produced high levels of Dscam and gave them the cancer drug, which acts by blocking the action of Abl.

In one experiment, directly overexpressing Dscam led to flies with neuron endings (called presynaptic terminals) more than 50 percent longer than normal. But flies treated with the cancer drug showed only a 15 percent increase.

In another experiment using a genetic model of Fragile X, the flies had presynaptic terminals almost a third longer than normal, but those that received the drug saw only 3 percent more terminal growth than the control group.

“Although there’s an amazing amount of similarity between flies and humans, more study is needed before we’ll know if this could be a safe and effective treatment for human patients,” said Ye, who is also an assistant professor in the Department of Cell and Developmental Biology at the U-M Medical School.

The next step would be to test the approach in mouse models of these brain disorders. Collaborations with oncologists and pharmaceutical companies will also be essential to ensure Abl inhibitors are safe to use in this context, Ye said.

“This study is also an example of the utility of model organisms,” Ye said. “Fruit flies grow and develop rapidly—and although the behaviors of flies and humans are very different, our neurons grow in much the same way, and the genes controlling this process are usually the same or very similar.”

This work was supported by grants from the National Institutes of Health, the Protein Folding Disease Initiative of the University of Michigan and the Pew Scholars Program in the Biological Sciences. U-M has a patent application based on this discovery and is looking for a commercial partner to develop it into treatments.

The Life Sciences Institute is a nucleus of biomedical research at U-M. LSI scientists use a range of tools and model organisms to explore the most fundamental biological and chemical processes of life. The institute houses an academic early drug discovery center, a cryo-electron microscopy laboratory, a comprehensive protein production and crystallography facility and a stem-cell biology center.

More about the Bing Ye lab