“Made in Michigan” times three: First clinical trials begin for drug developed at U-M and licensed to a U-M spinoff based on campus

ANN ARBOR, Mich. — For any biotechnology company, getting the first product out of the lab and into patients in a clinical trial is a major milestone, and a cause for celebration.

But not many of those companies get to celebrate on the campus where the idea for their product was born and first developed.

That’s the case today for Lycera, a University of Michigan spinoff company that announced yesterday it has launched Phase I clinical trials of a drug that seeks to treat the inflamed intestines of people with Crohn’s disease and ulcerative colitis. The trial, Lycera’s first, will assess its safety in healthy volunteers.

The approach got its start more than a decade ago at U-M, in the Chemistry Department laboratory of Gary D. Glick, Ph.D. Working with Medical School researcher Anthony Opipari, M.D., Ph.D. and a team of researchers and students, they did the basic research that showed the promise of a new mechanism and novel small molecules that target immune cells which cause diseases like lupus, psoriasis, rheumatoid arthritis, and colitis while sparing healthy cells.

That approach became the core technology for Lycera when Glick founded the company in 2006, and licensed patents for this class of drugs from U-M through the Office of Technology Transfer.  The team at Lycera used this as a starting point, and after subsequent work, discovered the drug LYC-30937.

When Lycera needed to expand in 2011, it found the perfect facility at the university’s North Campus Research Complex – a former pharmaceutical research site that U-M had bought just two years earlier, and that still contained the exact kind of research labs and equipment that Lycera needed. It leases 14,000 square feet at market rates and employs approximately 30 people – up from five when the company began.

There, the company continued to study the drug in cells and animals, develop the targeted oral formulation that makes it an attractive potential alternative to current injected drugs, and gather the evidence that led to the approval of the clinical trial.

All along, Lycera’s work has been fueled by tens of millions of dollars in investment from blue chip venture capital firms, including U-M’s own Michigan Investment in New Technology Startups (MINTS) fund.

At the same time, the company has invested some of its money to sponsor research by U-M Medical School research teams -- ones that study the autoimmune diseases that the company specializes in. That cooperative work could lead to future products or other applications of any of the core technologies that Lycera is now developing.

The company has also offered training opportunities to a broad range of students, and hired recent U-M graduates as well as scientists who once worked for Pfizer when it owned what is now NCRC. It even co-sponsors a lecture series. 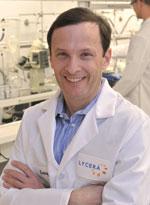 “I can’t tell you how wonderful it is to be here, as both a faculty member and as a company,” says Glick, who still holds academic appointments as the Bachmann Collegiate Professor of Chemistry and a joint post in the Medical School’s Department of Biological Chemistry while serving as Lycera’s chief scientific officer. “It’s the best research site I have ever seen – the facilities are amazing, the interactions are amazing, the people are spectacular. I owe a huge debt of gratitude to U-M, and I’m glad that we may be able to do something that’s really going to help people.”

Opipari, who splits his time between the Medical School’s Department of Obstetrics and Gynecology and Lycera, agrees.

“The cross-university effort that led to this technology is a terrific demonstration of what can get accomplished when you bring people from different training backgrounds and different work environments together,” he says. “U-M is a terrific environment that facilitates and encourages these sorts of non-traditional professional interactions. Otherwise, it would have been very difficult for us to have worked together like we did over the years. That allowed the science to take a course that wasn’t restricted by any sort of administrative boundary.”

The odyssey to this milestone began in an Ann Arbor supermarket, where Glick ran into Opipari and his wife Valerie Castle-Opipari, M.D., who he knew from a research committee and who is now chair of the U-M Department of Pediatrics. The two joined forces in Glick’s Chemistry lab to study the recently discovered compounds, and became friends as well as research and business partners.

Robin Rasor, the managing director of licensing for U-M, says “OTT is very pleased to celebrate Lycera’s first compound making it to the clinic, and we look forward to not only this compound continuing through the regulatory process but also for additional compounds to come from Lycera, adding to U-M’s portfolio of therapeutics in the clinic and on the market.”

Glick and Opipari note that the opportunities for students at Lycera has included medical students, and graduate students and recent alumni of programs from bioinformatics to pharmacology. This gave them the chance to train in a biotech environment on the U-M campus while still deciding on their career paths – and for some, led to employment after graduation that kept them in Michigan.

For Glick, who is married to a U-M psychiatry professor, the goal of finding better and more targeted treatment for inflammatory bowel disease is personal – their son has Crohn’s disease.

That disease, and the related condition ulcerative colitis, are both becoming more common – and science at U-M and elsewhere is showing how the body’s immune system causes the inflammation that brings on symptoms that make life miserable for many patients and can be fatal. The Lycera product aims to work upstream from the inflammatory process, and the drug’s formulation is designed to deliver the dose within the gut and not body-wide, to localize effects and reduce side effects.

The new trial is the first step toward determining if the promise seen in the labs of U-M and Lycera will play out in patients. That will take years, says Glick, and much remains to be seen. But one thing is certain, he says. “We would not be where we are without U-M.”

Disclosure: In addition to the university as a whole, and Glick and Opipari as individuals, several U-M faculty members hold equity in the company. Several others act as consultants to the company or have received research grants to support their work.