ANN ARBOR, Mich. — Two young men in their late teens sit in adjacent rooms of an inner-city emergency room. One is getting care for injuries he suffered in a fight, the other, for a sore throat. When the nurse tells each one he can go, both head back out to an environment rampant with violence, poverty and traumatic life experiences. 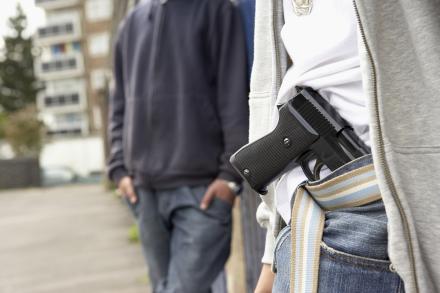 But, a new University of Michigan study finds, the one who had been in a fight will have a nearly 60 percent chance of becoming involved in a violent incident involving a firearm within the next two years. If he does, it’ll probably happen within the first six months after his ER visit.

And despite all the similarities between him and the other young man, his risk of being the victim or perpetrator of this firearm incident will be 40 percent higher.

The new findings, published in the journal Pediatrics by a team from the U-M Injury Center and U-M Medical School, come from a unique long-term study of nearly 600 young men and women between the ages of 14 and 24 living in Flint, Mich. Researchers connected with the young people on their initial visit to an emergency department and then again every six months during the next two years.

The researchers, led by U-M emergency physician Patrick M. Carter, M.D., an assistant professor of emergency medicine and member of the U-M Injury Center, say their findings support using the ER as the site for intervention, especially during the “teachable moment” that immediately follows an initial assault or fight.

“This study shows that youth seen and treated in urban emergency departments for an assault also have an elevated risk for severe forms of violence, including firearm violence, over the next two years,” says Carter. “The data also provides information on associated factors that increase this risk, and provides a roadmap for constructing evidence-based interventions to reduce the risk for severe firearm-related injury or death among high-risk youth populations.”

Although all the young people in the study had recently used drugs, those who had a diagnosable drug use disorder were noted to have an elevated risk for a firearm incident.

So did those who met the diagnosis for post-traumatic stress disorder before or during their emergency visit, and those who favored retaliation when asked about the best way to respond to insults or incidents.

Young men and African-Americans of both genders were also found to be more likely to be involved in a firearm incident within two years of their initial visit.

While not all who became involved in firearm violence had a gun at the beginning of the study, those who reported having a firearm at the time of their initial ER visit were much more likely to report being involved in a subsequent violent firearm incident.

Further, half of those who reported being the perpetrator of a firearm incident during the two-year study -- whether or not shots were fired – also reported having a firearm at the initial emergency visit.

Carter notes that this is the first study to prospectively look at these types of firearm violence outcomes among young people after emergency care. Past studies have primarily been retrospective in nature or looked only at those who required hospitalization, missing many emergency patients who don’t require a hospital stay after an assault.

Other research has shown that firearms are responsible for 31 percent of the 900,000 non-fatal assault injuries suffered by adolescents and treated in emergency departments each year and are the second leading cause of death among all youth overall in the United States, highlighting the importance of this public health problem.

Carter notes that past efforts led by U-M researchers to develop interventions for lower-risk teens with drinking and fighting have met with success. The new data could make it easier to adapt these types of approaches for use among this higher-risk population. He also notes that technology, including mobile devices, could be used to help augment these types of interventions, allowing for contact and continued intervention with teens and young adults after their ER visit.