ANN ARBOR, Mich. — Millions of times a year, teams at the University of Michigan Health System test samples of tissue, blood and other bodily fluids for patients of all ages. The results can reveal risks or signs of disease -- or response to treatment -- and help make a major difference in doctors’ decisions.

A new $160 million project will give U-M’s clinical testing teams the best possible facilities to work in. It will allow them to continue giving patients and doctors the high-quality test results they seek, faster and with higher reliability.

The U-M Board of Regents approved the project in a vote today. Now, UMHS will begin creating an entirely new 139,000-square-foot home for most of its clinical pathology activities, and renovating another 47,000 square feet of existing space. 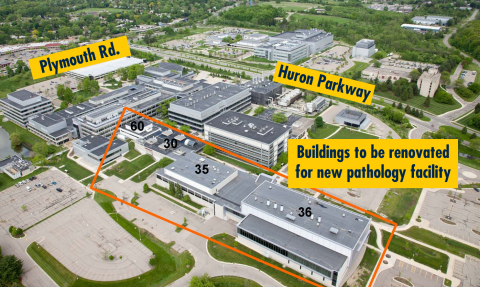 The new facility will occupy four vacant buildings at U-M’s North Campus Research Complex, less than three miles from the main U-M medical campus. It’s the first clinical use of space at NCRC, which U-M purchased from Pfizer six years ago.

Just as NCRC’s other buildings have allowed the university to bring together researchers from many disciplines, the new facility will allow UMHS to unite more than 450 faculty and staff who currently work in 10 locations.

In addition to the NCRC facility, the project includes renovations at two existing locations, in University Hospital and an adjoining building on the medical campus.  UMHS will dedicate these to urgent, or “STAT”, tests for patients in emergency, critical care and inpatient settings, while non-STAT, or less urgent, tests will be performed at NCRC.

“Through this project, we’ll create an ideal clinical testing experience for patients and their care teams, while improving efficiency, the work environment and training opportunities for our staff and faculty,” says T. Anthony Denton, the acting chief executive officer and chief operating officer of the U-M Hospitals and Health Centers.

Demand for UMHS lab tests, from simple blood sugars to complex genetic tests for rare diseases, has risen nearly 8 percent every year for the past 5 years. UMHS offers more than 1,100 types of tests to patients of all ages.

Most are for the patients who come to UMHS hospitals and clinics from every county of Michigan, every other state in the nation and dozens of other countries.

About 8 percent of tests are done for patients whose doctors elsewhere send samples to U-M for testing by M-Labs, which is the outreach portal for UMHS Laboratories.

“As the era of personalized medicine dawns, we predict rapidly increasing demand for molecular diagnostics that can allow medical teams to customize treatment to the individual patient in ways that we couldn’t dream of even a decade ago,” says Charles Parkos, M.D., Ph.D., chair of pathology at the U-M Medical School. “This project will prepare us for this new era, and the growth in state-of-the-art testing it will likely bring.”

The new space at NCRC will also include faculty offices and facilities for training the medical residents and clinical fellows who start their medical careers in pathology at U-M.

The facility at University Hospital for STAT lab tests will include a fully automated core laboratory that will process samples faster, and expanded space for the U-M Blood Bank, apheresis service and stem cell processing. A form of advanced testing called frozen section biopsy will continue at four surgery sites, to guide doctors during cancer-removal procedures.

The entire project will be designed by the architectural firm of Tsoi/Kobus and Associates, and the renovation will create 118 construction jobs. It will also free up space at several U-M medical campus buildings for other purposes.

The pathology project will continue the pace of growth at NCRC, which received its first U-M occupants five years ago this month.

In all, more than 2,400 people now work at NCRC – more than worked at the campus when Pfizer owned the 140-acre site and used its 28 buildings. The pathology project will add hundreds more.

They include nearly 200 faculty members and their teams of staff and students from 10 U-M schools and colleges; hundreds of staff from administrative units that support research; and the employees of 22 private companies, including 18 U-M startups based in U-M’s Venture Accelerator.

Fittingly, the new pathology facility will be adjacent to the Biorepository, a new Medical School facility at NCRC that collects, processes, stores and distributes human specimens and associated clinical data for U-M biomedical researchers.

In all, U-M has activated 70 percent of NCRC space, 97 percent of which is occupied or committed including the four clinical pathology buildings. In addition, 32 acres of open land at NCRC is being transformed into M City, a large-scale testing facility for connected and automated vehicle systems that will open this summer.

This year also brings the move of the labs of several newly recruited faculty to NCRC, and the expansion of the space there for the Institute for Healthcare Policy and Innovation.