Should they stay or should they go? Study finds no harm from hospital policies that let families observe CPR

ANN ARBOR, Mich. — When a hospital patient’s heart stops, the drama starts, as doctors and nurses work furiously at resuscitation. And at many hospitals, that’s the cue for someone to pull a curtain and hurry the patient’s loved ones out of the room. 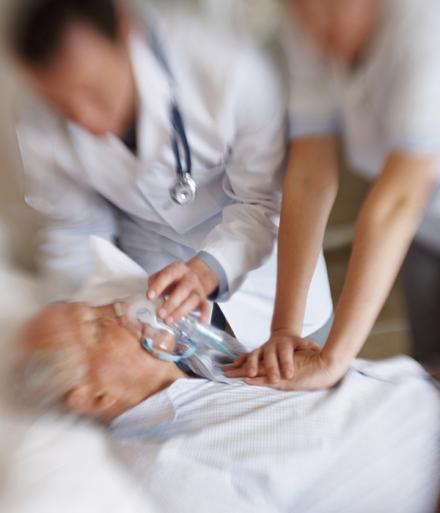 But some hospitals allow those family members to stay, and watch the cardiopulmonary resuscitation (CPR) and other attempts to save the patient’s life that the medical team makes.

Now, a study has shown for the first time on a national scale that patients do just as well after a cardiac arrest at those hospitals, compared with ones that don’t allow families to stay during resuscitation.

In a paper in the May issue of Circulation: Cardiovascular Quality and Outcomes, a team from the University of Michigan Medical School and University of Washington School of Medicine reports results from their analysis of 41,568 patients who went through resuscitation efforts at 252 hospitals. All the hospitals were taking part in a national effort to improve resuscitation outcomes.

In all, 13,470 of those patients were treated at 80 hospitals with policies allowing for family presence during resuscitation, or FPDR.

Across all patients, more than 57 percent had their heart restarted by resuscitation. Only 17.6 percent of all patients survived to go home from the hospital – a sobering reminder of the long odds against cardiac arrest victims even when they are surrounded by medical professionals. 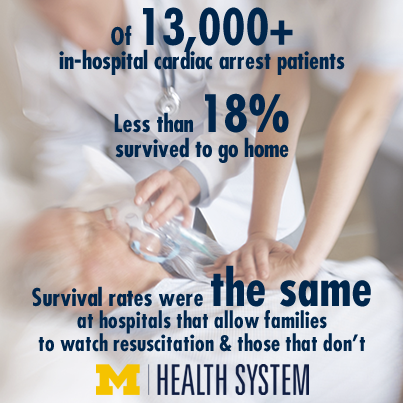 “Many studies have shown that family presence during resuscitation benefits family members, but we have lacked evidence about any impact of these policies on the patients themselves,” says Colin Cooke, M.D., M.Sc., a U-M intensive care physician who has himself helped try to revive many patients who have “coded.”

Among other things, past research has shown that family members who witness a resuscitation experience less depression and fewer post-traumatic stress symptoms. They may come away with a sense of closure -- a feeling that even if the patient died, the medical team did all it could.

But many hospitals have held back on allowing family presence, out of a concern that loved ones could distract medical team members, get in their way, or even be more likely to sue afterward if the patient dies or suffers serious brain damage.

“Our study tried to look at this in as comprehensive a way as we could, and we can’t see anything in these findings that says these policies are harmful,” continues Cooke, an assistant professor of pulmonary and critical care medicine. “So, there are no compelling reasons to say we shouldn’t allow families to be present – and lots of reasons to say we should.”

Cooke notes that the U-M Health System, where he and several of his co-authors practice, has had a policy since 2009 that allows family presence during resuscitation. A social worker or other member of the “code team” stays with family members, whether or not they choose to witness the resuscitation effort, and updates them on what the team is doing to try to save the patient.

Sometimes, he says, spouses or grown children will speak up during a resuscitation – to ask the team to stop their efforts because it’s not what the patient would have wanted.

For patients already facing critical illnesses, and the potential for permanent brain damage if prolonged resuscitation doesn’t work, the policies empower family members to seek the best outcome for their loved one, Cooke notes. The “shock and awe” of seeing and hearing the resuscitation effort can be overwhelming for families  -- but can also help them understand a patient’s death occurred despite the best efforts of an entire team.

The new study did show that there may be slight differences between FPDR and non-FPDR hospitals in certain measures, including the length of time it took to start delivering electric shocks with a defibrillator, and the insertion of a needle to deliver medication intravenously.  But these were not sizable differences. The length of resuscitation efforts was slightly shorter at FPDR hospitals, though there was no difference in the number of defibrillator shocks delivered.

Cooke and his co-authors, including first author, U-W cardiologist and former U-M cardiology fellow Zachary D. Goldberger, M.D., M.S., note some limitations to their study. Namely, the data they used can’t tell them which patients actually had family members present or which ones were present during their resuscitation efforts at the hospitals that allow it. Doing such a study in future would help settle the issue further.

The data for the study came from the Get with the Guidelines-Resuscitation effort funded by the American Heart Association. The initiative allows hospitals around the United States to collect data on in-hospital cardiac arrests, to enable efforts to improve treatment and outcomes.

The study was supported by the Agency for Healthcare Research and Quality (HS020672). In addition to Cooke and Goldberger, the authors include Brahmajee K. Nallamothu, M.D., MPH of U-M; U-W’s Graham Nichol, MD, MPH; J. Randall Curtis, MD, MPH; and Paul S. Chan, MD, MSc of the St. Luke’s Mid-American Heart Institute in Kansas City, MO.  Cooke and Nallamothu are members of the U-M Institute for Healthcare Policy and Innovation, and Nallamothu is a member of the VA Center for Clinical Management Research.