Despite overall lack of success, small subset of patients responds to investigational drug

ANN ARBOR, Mich. — A new international study gives a glimmer of hope for personalizing treatment for one of the most rare and aggressive forms of cancer. 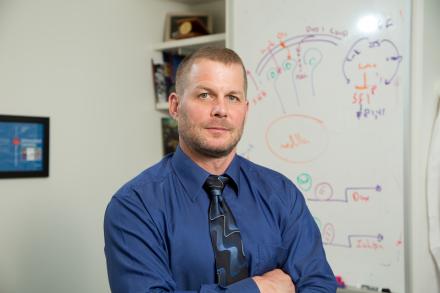 In a randomized phase 3 trial, adrenal cancer patients receiving the investigational drug linsitinib fared no better than patients receiving a placebo. But the researchers noticed a small subset of patients who had significant response and remained on the drug for an extended time.

“While it was only a small subset of patients who responded to linsitinib, this remains very promising in the era of precision medicine,” says co-principle investigator Gary D. Hammer, M.D., Ph.D., Millie Schembechler Professor of Adrenal Cancer at the University of Michigan Comprehensive Cancer Center. The other co-principle investigator is Martin Fassnacht, M.D., head of the division of endocrinology and member of the Comprehensive Cancer Center at the University of Würzburg, Germany.
The study enrolled 139 patients from nine countries and randomized them to receive linsitinib or placebo. Linsitinib was given as a pill taken twice daily for 21-day cycles.
The study stemmed from laboratory studies and early stage clinical trials originated at the University of Michigan and other groups to understand the role of insulin growth factor 2 in adrenal cancer. Laboratory studies showed linsitinib blocks the insulin receptor pathway, which is known to play a role in how adrenal cancer develops.
The phase 3 study was unblinded because the researchers were seeing no difference in survival between the group receiving the drug and those receiving placebo. Overall survival was 323 days for the linsitinib group and 356 for the placebo group. The time till cancer started progressing was 44 days for linsitinib and 46 days for placebo.
But at the time the study was unblinded, four patients who were currently enrolled on the linsitinib arm chose to continue treatment with linsitinib. In this small subset, the cancer was kept in check for two to four years. Across the whole study, eight patients taking linsitinib had progression-free survival for at least 150 days. None from the placebo group did.
“One of our patients is still controlling her disease with a remarkable partial response by taking linsitinib now for more than 4 1/2 years - which is really amazing in advanced adrenal cancer, which has usually a median survival of less than 15 months," Fassnacht says.
“This was a real response for a small group of patients. If we can find a way to identify who is likely to be among the exceptional responders, we can potentially make a real difference for this group of patients. This paves the way toward individualized and improved therapeutic options in adrenal cancer,” Hammer says.
The study is published in Lancet Oncology.
The researchers were not immediately able to find any obvious factors that would predict a response to linsitinib. They plan to evaluate the DNA collected through the study to identify possible markers for response.
Adrenal cancer is extremely rare, affecting about two in every million people worldwide. Few treatment options exist, and it’s often difficult to conduct clinical trials because the number of patients diagnosed is small. Hammer and Fassnacht have forged relationships with adrenal cancer researchers around the world to foster an international collaborative effort to improve treatment for this disease.
Additional authors: Martin Fassnacht, Alfredo Berruti, Eric Baudin, Michael J Demeure, Jill Gilbert, Harm Haak, Matthias Kroiss, David I Quinn, Elizabeth Hesseltine, Cristina L Ronchi, Massimo Terzolo, Toni K Choueiri, Srinivasu Poondru, Tanya Fleege, Ramona Rorig, Jihong Chen, Andrew W Stephens, Francis Worden
Funding: Astellas
Disclosure: Hammer is on the advisory board of Atterocor and has been a consultant for Orphagen and ISIS Pharmaceuticals. He holds a pending patent for ATR-101.
Reference: Lancet Oncology, published online March 18, 2015