ANN ARBOR, Mich. — While most of America worries about matchups on the basketball court, a different kind of match happened today at the U-M Medical School.

And for the 172 medical students involved, those who love them, and those who taught them, it was just as exciting as Selection Sunday.

At exactly noon, those students found out where they’ll go for their next round of training, after they graduate in exactly two months.

With a flurry of opening envelopes, they learned which residency program they’ve “matched” to, for three to seven years of training to learn a particular specialty and prepare to practice on their own.

More than 500 friends, family and professors joined the students in celebrating the annual Match Day ritual. The U-M students’ suspense was shared by thousands of students like them nationwide, nearly all of whom learned their residency matches at the same time.

Each graduating medical student around the country enters the matching process by ranking the locations where they’d most like to train for their chose specialty.  The residency programs rank the students they’d most like to take. Then, an elaborate computer-based system puts it all together to make the best matches. 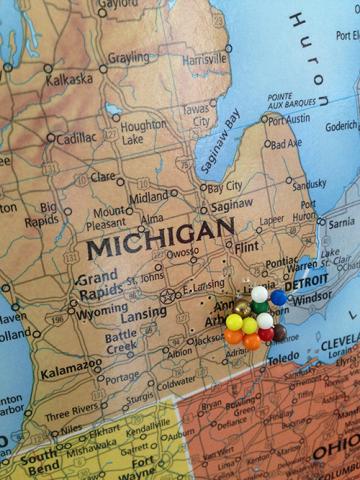 58 of 2015 graduates are staying in Michigan

At the U-M Match Day celebration, some students chose to open their envelopes on stage and share their moment of surprise with the entire class. All of them had a chance to announce their destination, and place a pin on a map of the U.S.

The event came one week after the U-M Medical School was ranked 10th among U.S. research-oriented medical schools and 5th for primary care schools by U.S. News & World Report. U-M also tied for fourth in the estimation of residency directors – senior doctors at teaching hospitals nationwide who interview and select graduating medical students to enter their programs.

Here are some highlights of this year’s match:

For more about Match Day this year and in past years at U-M, see http://umhealth.me/UMmatchday