Approach could help focus efforts on those who stand to gain most from drugs & lifestyle change, and could be used for other diseases

ANN ARBOR, Mich. — How can we keep more people from joining the ranks of the 29 million Americans already diagnosed with diabetes? What if we could tell with precision who has the highest risk of developing the disease, and figure out which preventive steps are most likely to help each of them individually? 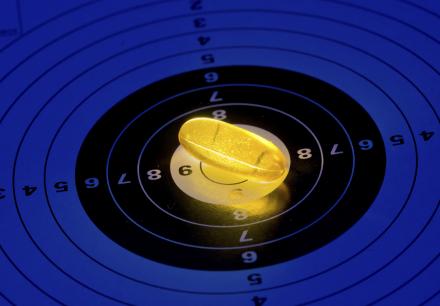 The new model may allow better targeting of drugs and lifestyle changes to those who can benefit most.

Researchers have just released a “precision medicine” approach to diabetes prevention that could do just that – using existing information like blood sugar levels and waist-to-hip ratios, and without needing new genetic tests.

Their newly published model examined 17 different health factors, in an effort to predict who stands to gain the most from a diabetes-preventing drug, or from lifestyle changes like weight loss and regular exercise. Seven of those factors turned out to matter most.

Want to see what your risk might be? Calculate it using the tool below.

The model is published in the British Medical Journal by a team from the University of Michigan, VA Ann Arbor Healthcare System and Tufts Medical Center in Boston.

They hope to turn it into a tool for doctors to use with patients who have “pre-diabetes”, currently defined by abnormal results on a test of blood sugar after fasting. They also hope their approach could be used to develop similar precise prediction models for other diseases and treatments. 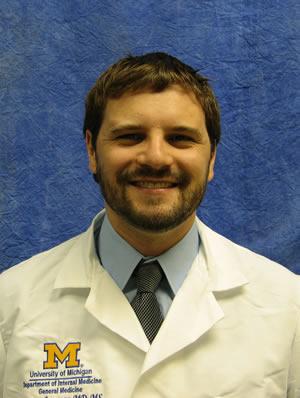 “Simply having pre-diabetes is not everything,” says lead author Jeremy Sussman, M.D., M.S. “This really shows that within the realm of pre-diabetes there’s a lot of variation, and that we need to go beyond single risk factors and look holistically at who are the people in whom a particular approach works best.” Sussman is an assistant professor of general medicine at the U-M Medical School and a research scientist at the VA Center for Clinical Management Research.

The team developed the model using data from a gold-standard clinical trial of diabetes prevention: the Diabetes Prevention Program, which randomly assigned people with an elevated risk of diabetes to placebo, the drug metformin, or a lifestyle-modification program.

The team developed and tested their model by carefully analyzing data from more than 3,000 people in the study, all of whom had a high body mass index and abnormal results on two fasting blood sugar tests. Most also had a family history of diabetes, and more than a third were African American or Latino – all known to be associated with higher risks of diabetes. In all, they looked at 17 factors that together predicted a person’s risk of diabetes – and his or her chance of benefiting from diabetes-preventing steps. They found seven factors were most useful. 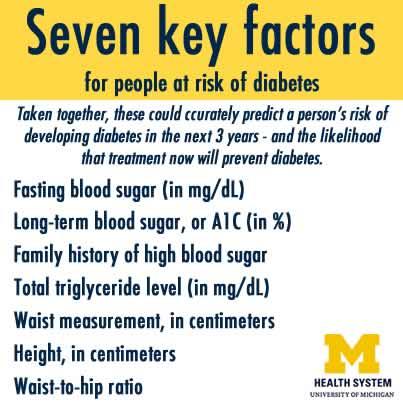 “Our research has found that it is common that, although the average benefit in a clinical trial might be moderate, in reality those patients at high risk for a bad outcome get a lot of benefit, the average patient has modest chance of benefiting, and lower-risk patients may have little to no chance of benefitting, or are being harmed,” remarks co-author Rod Hayward, M.D. “In this instance, a more rigorous analysis of this important trial found that three-quarters of patients took a drug with non-trivial side effects without receiving any benefit, but that the average benefit found in the trial also greatly under-estimated the benefits for those at very high risk of developing diabetes in the next three to five years.”

Hayward is a professor of medicine and public health at U-M and a senior research scientist at the VA Center for Clinical Management Research. He and Sussman are members of the U-M Institute for Healthcare Policy & Innovation.

Key question: Who gains the most from prevention?

The team found that metformin benefited only the people who the model showed had the very highest risk of developing diabetes. But for them, it really made a difference, bringing down their risk of the disease by 21 percentage points.

By contrast, exercise and weight loss, with encouragement from a health coach, benefited everyone in the DPP study to some extent, the new model shows.

For the one-quarter of study participants who the model says had the highest risk of diabetes, this lifestyle intervention cut their chance of developing the disease by 28 percentage points. For those who had the lowed diabetes risk, this same intensive lifestyle change brought down their risk too – but only by 5 points.

Figuring out who is in the highest-risk group, by applying the new model to members of the general population, could really help guide doctors – especially since metformin does come with side effects, but also can help some patients get a jump start on losing weight.

On the flip side, just because exercise and weight loss didn’t make a huge dent in the diabetes risk of those who were on the lower end of the risk scale to begin with, that doesn’t mean it’s not useful, the researchers make clear. Exercise and weight loss have many other benefits besides lowering diabetes risk – including reducing cardiovascular risk and improving mood and mobility.

The researchers hope their paper serves as a proof of principle to researchers studying other disease and prevention strategies, showing the power of the approach, technically called multivariate risk prediction to understand heterogeneity of treatment effect.

“We think this approach should be broadly applicable, since one of the main determinants of any patient’s likelihood of benefiting from a therapy is their risk of having the bad outcome that we are trying to prevent,” says co-author David M. Kent, M.D., M.Sc., a professor at Tufts University and director of the Predictive Analytics and Comparative Effectiveness Center at the Tufts Medical Center. “It is poorly appreciated how many patients receive treatments unnecessarily — when the possibility of benefit is very low, and may well be exceeded by the burdens of treatment. If these types of analyses were incorporated routinely into trial design, we believe we would have a much clearer understanding of this issue.” 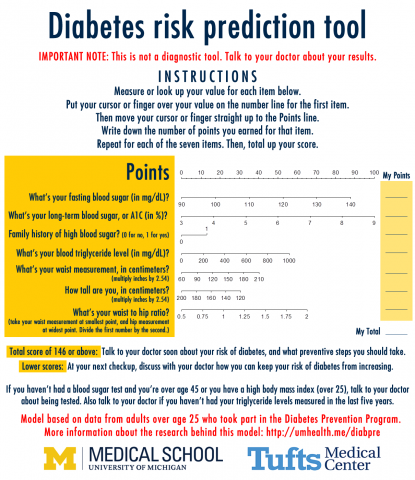