Stem cell success: One couple's effort to protect their son from fatal nerve disease will help other boys too

ANN ARBOR, Mich. — University of Michigan alumna Brooke Kendrick and her husband Stephen were ready to start a family. 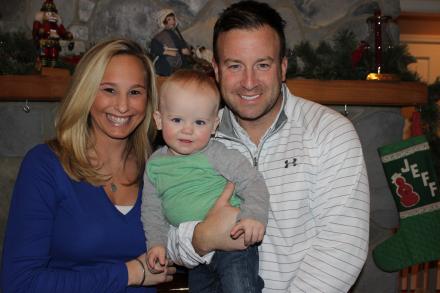 Brooke and Stephen Kendrick and their son, Gus - who has no risk of developing the deadly disease that runs in his mother's family

But a devastating inherited nerve disease runs in her family, affecting her brother and threatening to kill or cripple any male child she has. So, the couple chose to conceive via in vitro fertilization, to have their embryos tested for the genetic defect, and to implant only disease-free ones.

Now, as they get ready to celebrate the first birthday of their healthy son Gus, and the arrival of his sibling  conceived the same way, they know that they’ve stopped adrenoleukodystrophy, or ALD, from traveling further down their family line.

But at the same time, they’ve done something extraordinary for all families whose boys have ALD, whose men (like Brooke’s brother) have a less-severe form called AMN, or whose women and girls carry the genetic trait and might pass it on.

By donating the disease-affected embryos that they didn’t want to a U-M Medical School lab, they’ve made it possible for scientists to study ALD in its earliest stages.

The lab, called the MStem Cell Laboratories, derived embryonic stem cells from the embryo, and coaxed them to grow into nerve cells. 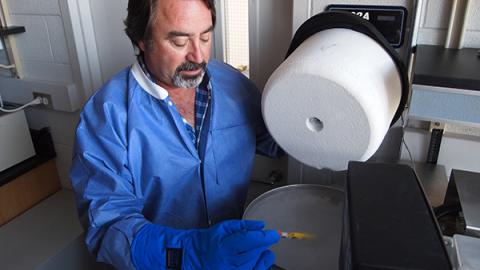 Once enough cells in a line have been generated, they're stored in a deep freezer -- and small batches are taken out for frozen shipment to scientists at U-M or other institutions who can use them in their research.

“When genetically abnormal embryos would otherwise be discarded, families may donate them to research toward cures for diseases affecting their loved ones,” says stem cell scientist Gary Smith, Ph.D., who directs the lab. “Disease-specific human embryonic stem cells are the gold standard for research – the purest pathway to understanding disease establishment and progression, and to discovering ways to prevent or alleviate pain and suffering caused by these diseases.”

Scientists at U-M and around the world are now using the nerve cells developed from the ALD-carrying stem cells. Each nerve cell, or neuron, carries the ALD gene defect – which lets scientists like U-M neurologist John Fink, M.D., study how the genetic abnormality affects nerve cells as they grow.

That path, from donated embryo to stem cells to the research labs of scientists, is one that the U-M team has now traveled several times, with donated embryos from other couples who sought to avoid passing a dangerous disease to their child.

Each stem cell line they produce gets submitted to a national registry – a clearinghouse to let scientists know which lines are available for them to study using federal research grants. In just over two years, the U-M team has contributed the most disease-specific stem cell lines of any institution, and 25 lines in all.

Each of the lines contains a genetic defect that leads to a devastating disease. In ALD’s case, it’s a rare disorder that causes damage to the fatty covering on nerve fibers in the brain, resulting in serious medical, developmental and mental health difficulties. In boys, it begins during childhood or the teen years, and kills within a few years. When the gene defect doesn’t start making its presence known until adulthood, it produces crippling nerve damage and other effects. It’s the same disease featured in the 1992 movie “Lorenzo’s Oil”.

The ALD stem cell line wouldn’t have happened without one other key player: the ALD Foundation, an awareness, support and fundraising organization led by a man who recently lost his stepson to the disease.

Brooke’s sister-in-law serves on the foundation’s board, and when Smith approached the foundation to ask for help in finding couples who might consider donating ALD-affected embryos, the connection was made through the foundation’s director, David Cry. 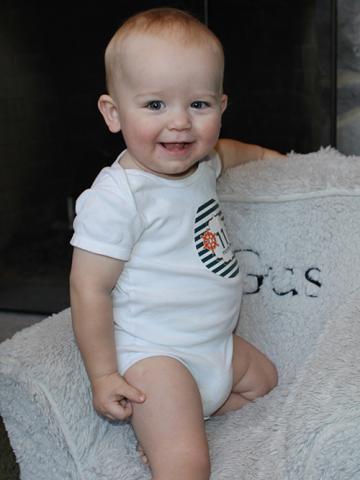 The icing on the cake for Brooke: The fact that the embryos would end up in a lab on the campus where she earned her education degree and was a champion varsity swimmer ten years ago.

“We put a lot of thought into our decision to donate, and it wasn’t one that we went into lightly,” Brooke says. “But in the end, it was a no-brainer, and we’re very excited that this is all happening from our donation.”

For couples considering doing the same process that she and her husband did -- called pre-implantation genetic diagnosis or PGD – the options are growing. New validated tests for severe inherited diseases are being developed on a regular basis.

But not every couple faced with the risk of passing along one of these diseases knows that they may have the opportunity to have PGD testing, and to donated the embryos that carry the genetic defect to science via a lab such as U-M’s.

Once the stem cell lines are produced and accepted into the national registry maintained by the National Institutes of Health, though, scientists can use their federal grants to study them.

For John Fink, a professor in the U-M Medical School Department of Neurology who has studied and treated genetic nerve-destroying conditions for decades, the new availability of nerve cells made from embryonic stem cells is priceless.

“There is movement to develop treatments for ALD and AMN, but these are limited because we need better preclinical models of the disorder,” he says. “There is an ALD mouse model but these mice have only minimal symptoms that occur after 18 months. We need to develop better models to that we can screen potential drugs before they are tried in humans. We have many drugs we’d like to try, but the cells will allow us to screen potential treatments them before they go any further in testing.” 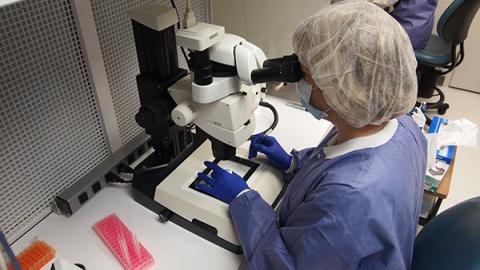 In the U-M MStem Cell Lab, a team of researchers derive new lines of human embryonic stem cells, and make them available to researchers worldwide.

Fink and his colleagues around the world are also using the new ALD cell line to figure out the precise steps that cause the symptoms seen in the disease. They also want to explore whether AMN, the adult form of ALD, a form of a disease called hereditary spastic paraplegia. Fink is working with Dr. Patrick Auborg of France, who discovered the genetic defect that causes ALD.

Looking back over the last six years, and forward, Smith says, “I am so very thankful for the opportunity to help individuals and families affected with life-threatening diseases. It is an honor, and a privilege, to work with donors, foundations, and physician scientists in using disease-specific human embryonic stem cells in discovering the mysteries of these diseases, and strategizing on future treatments and cures. Individually we can make progress, but collectively we can make a difference.”

Smith is a professor in the Department of Obstetrics & Gynecology, with joint appointments in Molecular & Integrative Physiology and Urology.

To learn more about donating disease-affected embryos or funds to the MStem Cell Labs, visit http://www.stemcellresearch.umich.edu/

For more information on treatment for inherited neurological diseases at the U-M Health System, visit the Neurogenetics Clinic web page.