ANN ARBOR, MICH.  – The University of Michigan Frankel Cardiovascular Center has sent home a patient with a total artificial heart, a first in heart care in Michigan.

The Freedom® Driver, a portable 13-pound device designed to help patients at risk of dying from end-stage biventricular heart failure, allowed 24-year-old Stan Larkin, of Ypsilanti, Mich., to spend Christmas at home with family as he waits for a heart transplant.

He’s the first to leave a Michigan hospital without a human heart and is part of a unique group of heart patients in the United States who’ve gained independence because of the wearable technology.

“The device Stan has is the SynCardia temporary Total Artificial Heart, a mechanical pump to bridge him to transplantation,” says University of Michigan cardiac surgeon Jonathan Haft, M.D.  “He’s still listed for a heart transplant and we hope to transplant him as soon as an organ is available. In the meantime he can be at home, he can be functional, and continue to rehabilitate himself so he’s in the best possible shape when his opportunity comes.”

With the total artificial heart there are two tubes that exit the body, and those tubes have to be connected to a machine that can deliver compressed air into the ventricles to allow blood to be pumped through the body.

Prior to the development of the Freedom portable driver, the only FDA-approved driver for the SynCardia temporary Total Artificial Heart was the “Big Blue” hospital driver which weighs 418 pounds and is the size of a washing machine.

Due to a shortage of organs, total artificial heart patients supported by Big Blue were confined to the hospital for months, sometimes years, while waiting for a matching donor heart. The Freedom® driver does the same thing as Big Blue -- deliver the compressed air -- except it is portable.

It's the latest milestone in efforts to replace the failing heart as heart disease grows and donor hearts remain scarce.

“I had a lot of questions but I was enthusiastic to learn,” says Larkin who was discharged Dec. 23. “This is what’s keeping me going. I can’t wait to get a heart transplant so I can truly feel like myself again.” 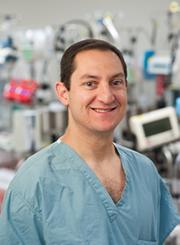 Heart failure is considered advanced when patients feel shortness of breath even at rest. Even at an advanced stage, treatment options exist to help the heart pump as best as it can.

Ventricular assist devices have been used for well over a decade to improve survival and quality of life as patients wait for a heart transplant.

When all other treatment options – including medications, lifestyle changes and heart procedures – have failed the devices may be used as destination therapy. Unlike bridge therapy, destination therapy keeps patients on an LVAD for the rest of their lives.

Stan Larkin and his brother Dominique Larkin, 23, are in a simultaneous battle with heart disease. In 2007 Stan collapsed at a basketball game and heart tests revealed a condition called right ventricular dysplasia, a disease that's a leading cause of cardiac arrest.

Because the heart condition can be inherited, doctors believed others in his family might be at risk.  Stan and his younger brother were found to have familial cardiomyopathy which impacts the heart muscle.

Some people who have cardiomyopathy—especially those who have hypertrophic cardiomyopathy (HCM)—may live a healthy life with few problems or symptoms. Others may have serious symptoms and complications. As the heart becomes weaker, it is less able to pump blood through the body and maintain a normal electrical rhythm.

Surgeons implanted a defibrillator to help regulate Stan’s heart rhythm. His heart disease worsened to cardiogenic shock, a medical emergency that’s fatal if not treated right away. On Nov. 7, doctors removed his failing heart and replaced it with the SynCardia temporary Total Artificial Heart.

First connected to Big Blue, he was switched to the Freedom driver, which was approved by the FDA in June 2014 to power the total artificial heart as a bridge to transplant. His care marks two milestones: as the first U-M patient to make the transition to the Freedom driver and first patient in Michigan to go home with it.

“He says he’s proud of me,” says Stan Larkin who worked with occupational and physical therapists to be well enough to navigate the world with the Freedom Driver. Staying close to a power supply, eating low sodium meals and taking a bevy of blood-thinning medications are the rules of the road.

There’s no denying when Stan’s around because of the sound of the rhythmic pulses broadcast by the device strapped to his back, but Stan says, “I can honestly say I’ve gotten used to it.”

About the U-M’s Center for Circulatory Support

The University of Michigan Center for Circulatory Support is a multidisciplinary team of physicians, surgeons and allied health professionals dedicated to the care of patients with advanced heart failure or cardiogenic shock. Center physicians and researchers have provided leadership in the clinical investigation of most of the implantable circulatory support devices in use today and have implanted more than 500 devices.

To make an appointment at the University of Michigan Frankel Cardiovascular Center, send an email to us at CVCCallCtr@med.umich.edu, or call 888-287-1082.