ALERT: Michigan Medicine has not administered any J&J vaccine through our patient vaccine program. Learn more.

Breast cancer is the most common cancer in pregnant and postpartum women and occurs in about 1 in 3,000 pregnant women. The average patient is between the ages of 32 years and 38 years. Because many women are choosing to delay childbearing, it is likely that the incidence of breast cancer during pregnancy will increase. 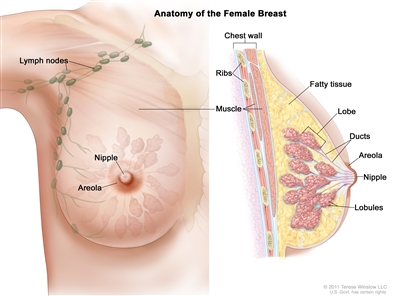 The natural tenderness and engorgement of the breasts of pregnant and lactating women may hinder detection of discrete masses and early diagnosis of breast cancer. Delays in diagnosis are common, with an average reported delay of 5 to 15 months from the onset of symptoms.[1,2,3,4] Because of this delay, cancers are typically detected at a later stage than in a nonpregnant, age-matched population.[5]

The following tests and procedures may be used to diagnose breast cancer during pregnancy:

To detect breast cancer, pregnant and lactating women should consider practicing self-examination and undergo a clinical breast examination as part of the routine prenatal examination by a doctor. If an abnormality is found, diagnostic approaches such as ultrasound and mammography may be used. With proper shielding, mammography poses little risk of radiation exposure to the fetus.[6] Mammograms are only used, however, to evaluate dominant masses and to locate occult carcinomas in the presence of other suspicious physical findings.[6]

Because at least 25% of mammograms in pregnancy may be negative in the presence of cancer, a biopsy is essential for the diagnosis of any palpable mass. Diagnosis may be safely accomplished with a fine-needle aspiration, core biopsy, or excisional biopsy under local anesthesia. To avoid a false-positive diagnosis as a result of misinterpretation of pregnancy-related changes, the pathologist should be advised that the patient is pregnant.[7]

Breast cancer pathology is similar in age-matched pregnant and nonpregnant women. Hormone receptor assays using a competitive binding assay are usually negative in pregnant breast cancer patients, but this may be the result of receptor binding by high serum estrogen levels associated with the pregnancy. Enzyme immunocytochemical receptor assays are more sensitive than competitive binding assays. A study that used both assay methods indicated similar receptor positivity between pregnant and nonpregnant women with breast cancer.[8] The study concluded that increased estrogen levels during pregnancy could result in a higher incidence of receptor positivity detected with immunohistochemistry than is detected by radiolabeled ligand-binding assay because of competitive inhibition by high levels of endogenous estrogen.

Refer to the Diagnosis section in the PDQ summary on Breast Cancer Treatment for more information about the diagnosis of breast cancer.

The following procedures are used to determine the extent of the cancer:

Procedures used for determining the stage of breast cancer are modified for pregnant women to avoid radiation exposure to the fetus. Nuclear scans cause fetal radiation exposure.[1] If such scans are essential for evaluation, hydration and Foley catheter drainage of the bladder can be used to prevent retention of radioactivity. Timing of the exposure to radiation relative to the gestational age of the fetus may be more critical than the actual dose of radiation delivered.[2] Radiation exposure during the first trimester (>0.1 Gy) may lead to congenital malformations, mental retardation, and increased relative risk of carcinogenesis.

Chest x-rays with abdominal shielding are considered safe, but as with all radiologic procedures, they are used only when essential for making treatment decisions.[1,3] A chest x-ray delivers 0.00008 Gy.[4]

Evaluation of the liver can be performed with ultrasound, and brain metastases can be diagnosed with an MRI scan. Data on MRI during pregnancy are not yet available, but gadolinium crosses the placenta and is associated with fetal abnormalities in rats.[5]

Generally, pregnant women with stage I or stage II breast cancer are treated in the same way as nonpregnant patients, with some modifications to protect the fetus.

Treatment options for early/localized/operable breast cancer in pregnant women include the following:

The use of trastuzumab during pregnancy is contraindicated.

Surgery is recommended as the primary treatment of breast cancer in pregnant women.

The data regarding safety of sentinel lymph node biopsy in pregnant patients are limited to several retrospective case series. One study examined sentinel lymph node biopsy in eight patients in the first trimester, nine patients in the second trimester, and eight patients in the third trimester. Technetium Tc 99m alone was used in 16 patients, methylene blue dye alone was used in seven patients, and two patients had unknown mapping methods. All 25 patients had live-born infants, of whom 24 were healthy, and one had a cleft palate (in the setting of other maternal risk factors).[1]

Because radiation in therapeutic doses may expose the fetus to potentially harmful scatter radiation,[2] modified radical mastectomy is the treatment of choice if the breast cancer was diagnosed early in pregnancy. If diagnosed late in pregnancy, breast-conserving surgery with postpartum radiation therapy has been used for breast preservation.[3] An analysis has been performed that helps to predict the risk of waiting to have radiation.[4,5]

Data suggest that it is safe to administer certain chemotherapeutic drugs after the first trimester, with most pregnancies resulting in live births with low rates of morbidity in the newborns.

Anthracycline-based chemotherapy (doxorubicin plus cyclophosphamide or fluorouracil, doxorubicin, and cyclophosphamide [FAC]) appears to be safe to administer during the second and/or third trimester on the basis of limited prospective data.[6,7,8] Safety data on the use of taxanes during pregnancy are limited.

Evidence (use of chemotherapy during the second and/or third trimester of pregnancy):

Endocrine therapy is generally avoided until after delivery. Case reports and a literature review of tamoxifen during pregnancy show that tamoxifen administration during pregnancy is associated with vaginal bleeding, miscarriage, congenital abnormalities such as Goldenhar syndrome, and fetal death.[11,12,13] Breastfeeding is also not recommended concurrently with endocrine therapy.[14]

The use of trastuzumab during pregnancy is contraindicated based on results of a systematic review of 17 studies (18 pregnancies, 19 newborns).[15] Of the fetal complications noted, occurrence of oligohydramnios/anhydramnios was the most common (61.1%) adverse event. Of the pregnancies exposed to trastuzumab during the second or third trimester, 73.3% of the pregnancies were complicated with oligohydramnios/anhydramnios. Of the pregnancies exposed to trastuzumab exclusively during the first trimester, 0% (P = .043) of the pregnancies were complicated with oligohydramnios/anhydramnios. The mean gestational age at delivery was 33.8 weeks, and the mean weight of newborns at delivery was 2,261 grams or 4.984 pounds. In 52.6% of cases, a healthy neonate was born. At the long-term evaluation, all children who were without problems at birth were healthy, with a median follow-up of 9 months, and four of nine children who faced troubles at birth had died within an interval ranging from birth to 5.25 months. All children exposed to trastuzumab in utero exclusively in the first trimester were completely healthy at birth. The data suggest that for women who become pregnant during trastuzumab administration and wish to continue pregnancy, trastuzumab should be stopped and pregnancy would be allowed to continue.

There is no standard treatment for patients with advanced (stage III or stage IV) breast cancer during pregnancy. Most studies show a 5-year survival rate of 10% in pregnant patients with stage III or IV disease.

First-trimester radiation therapy should be avoided. Chemotherapy may be given after the first trimester as discussed in the section on Early/Localized/Operable Breast Cancer During Pregnancy.

Because the mother's life span may be limited, and there is a risk of fetal damage with treatment during the first trimester,[1,2] issues regarding continuation of the pregnancy should be discussed with the patient and her family. Therapeutic abortion does not improve prognosis.[1,2,3,4,5]

Suppression of lactation does not improve prognosis. If surgery is planned, however, lactation is suppressed to decrease the size and vascularity of the breasts. If chemotherapy is to be given, lactation is also suppressed because many antineoplastic agents (i.e., cyclophosphamide and methotrexate), when given systemically, may occur in high levels in breast milk and would affect the nursing baby. Women receiving chemotherapy should not breastfeed.[1]

No damaging effects on the fetus from maternal breast cancer have been demonstrated,[2] and there are no reported cases of maternal-fetal transfer of breast cancer cells.

Pregnancy in Patients With a History of Breast Cancer

Based on limited retrospective data, pregnancy does not appear to compromise the survival of women with a previous history of breast cancer, and no deleterious effects have been demonstrated in the fetus.[3,4,5,6,7,8,9,10,11] Some physicians recommend that patients wait 2 years after diagnosis before attempting to conceive. This allows early recurrence to become manifest, which may influence the decision to become a parent.

The PDQ cancer information summaries are reviewed regularly and updated as new information becomes available. This section describes the latest changes made to this summary as of the date above.

Editorial changes were made to this section.

This summary is written and maintained by the PDQ Adult Treatment Editorial Board, which is editorially independent of NCI. The summary reflects an independent review of the literature and does not represent a policy statement of NCI or NIH. More information about summary policies and the role of the PDQ Editorial Boards in maintaining the PDQ summaries can be found on the About This PDQ Summary and PDQ® - NCI's Comprehensive Cancer Database pages.

This PDQ cancer information summary for health professionals provides comprehensive, peer-reviewed, evidence-based information about the treatment of breast cancer during pregnancy. It is intended as a resource to inform and assist clinicians who care for cancer patients. It does not provide formal guidelines or recommendations for making health care decisions.

This summary is reviewed regularly and updated as necessary by the PDQ Adult Treatment Editorial Board, which is editorially independent of the National Cancer Institute (NCI). The summary reflects an independent review of the literature and does not represent a policy statement of NCI or the National Institutes of Health (NIH).

Board members review recently published articles each month to determine whether an article should:

Changes to the summaries are made through a consensus process in which Board members evaluate the strength of the evidence in the published articles and determine how the article should be included in the summary.

The lead reviewers for Breast Cancer Treatment During Pregnancy are:

PDQ is a registered trademark. Although the content of PDQ documents can be used freely as text, it cannot be identified as an NCI PDQ cancer information summary unless it is presented in its entirety and is regularly updated. However, an author would be permitted to write a sentence such as "NCI's PDQ cancer information summary about breast cancer prevention states the risks succinctly: [include excerpt from the summary]."

The preferred citation for this PDQ summary is:

Images in this summary are used with permission of the author(s), artist, and/or publisher for use within the PDQ summaries only. Permission to use images outside the context of PDQ information must be obtained from the owner(s) and cannot be granted by the National Cancer Institute. Information about using the illustrations in this summary, along with many other cancer-related images, is available in Visuals Online, a collection of over 2,000 scientific images.

Based on the strength of the available evidence, treatment options may be described as either "standard" or "under clinical evaluation." These classifications should not be used as a basis for insurance reimbursement determinations. More information on insurance coverage is available on Cancer.gov on the Managing Cancer Care page.

More information about contacting us or receiving help with the Cancer.gov website can be found on our Contact Us for Help page. Questions can also be submitted to Cancer.gov through the website's Email Us.